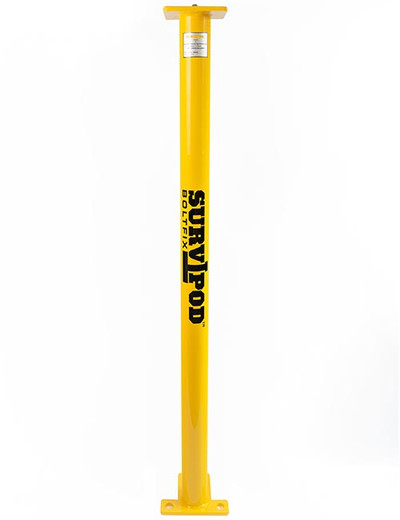 Survipod replaces conventional tripods, which by their very design are prone to unwanted interference and movement, thus improving speed and accuracy in the setting-out process.

With such rigid support, the risk for damaged Total Stations and other equipment is significantly reduced, greatly limiting the risk of serious and costly damage to highly-calibrated and sensitive technology.

Survipod has been used extensively on several of the UK’s highest-profile engineering and concrete formwork projects in recent years, including The Shard at London Bridge, Neo Bankside world-class development on the River Thames and Beetham London Tower.

The Survipod Boltfix setting-out tool is another innovative solution used to provde a stable platform for site set-out on any structure, steel-frame or concrete-frame.

Boltfix is simply bolted onto the steel or concrete. The instrument of choice is then screwed onto the stailess steel thread on top.

Survipod’s engineers were confronted with a project that was without a platform, on each floor, from which to begin setting-out a building from. The core walls were being built and advanced one floor higher than the decking level/floor. Traditionally, a tripod and concrete pad would have been used, but it was instead decided to engineer a custom solution which, when used together with an existing concrete structure on-site, resulted in a more reliable, accurate and simple method to begin setting-out.

This product hasn't received any reviews yet. Be the first to review this product!